Anything to do with games at all.
Post Reply
199 posts

Hello everybody, and welcome to the GRcade Gaming Alphabet. Do you play videogames? If so, continue reading. If not, close this tab immediately.

The GRcade Gaming Alphabet is a new, inconceivably exciting, virtually zero commitment and enthralling way to challenge us all to expand our videogame horizons over the course of the next calendar year. By signing up, you will be challenged to play videogames of your choice that you've never personally played before, throughout the course of 2022. The twist is, in doing so, you must play games with titles that begin with each letter of the English Alphabet!

I am hoping to get a large number of signups for this, potentially at least 500-1000.

RULES:
[*] Play games that you personally have never played before 1st January 2022
[*] Your challenge is to play games that begin with each letter of the English alphabet, for example, Lemmings will tick off your letter 'L' and Halo Infinite will tick off your letter 'H'!
[*] As we are starting this part way through January, you can of course retroactively add any new games you've played since 1st January 2022!
[*] You do NOT need to complete games that you add, merely play them to the extent that you are satisfied that you have experienced them
[*] You can of course play multiple games of the same letter if you like. These can be added to the spreadsheet but won't tick off any new letters 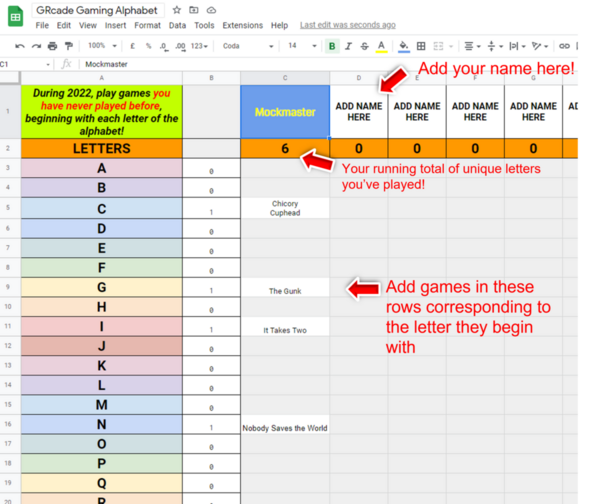 Alphabechievements
[*]There are also fun challenges you can take part in called Alphabechievements, such as 'Tick off 5 letters' or 'Play 5 games of the same letter' or 'Play a game that is at least 30 years old'. You can find these by scrolling down to the bottom of the GGA spreadsheet 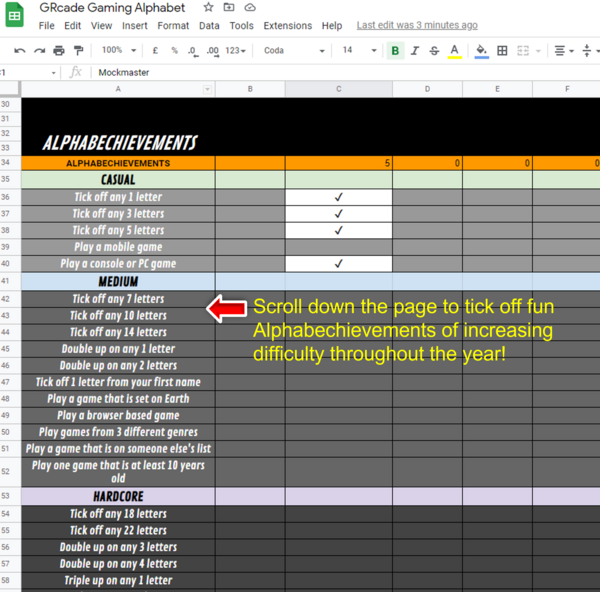 Every couple of months I will release a leaderboard that shows how many letters everyone has ticked off. Remember, this is over the course of the year, so there is no rush to complete your GRcade Gaming Alphabet! The Leaderboard is a fun competitive element.

Your ranking will improve as you play more new games and tick off more letters through the year.

- Do Remasters count as 'new' games I haven't played, even if I have played the original? Yes
- For games that have titles beginning with 'The' (e.g. 'The Legend of Zelda'), do they count as T or as the starting letter of the next word ('L' in the given example)? You can use either!
- Do DLC for existing games count as new games? It depends how substantial the DLC is - some DLC is almost the equivalent of a sequel. I will let you make this judgement.
- How long do I have to have played the game for it to count for the Alphabet? You need to feel like you have 'experienced' the game. Reaching the menu screen does not count.

Signing up costs nothing, and it will be fun to encourage discussion about what everyone is playing for each letter!

Good luck, and have toast.

What a way to return.

What year is it

. It's legit incredible to see you back here!

Right, now I'll go back and properly read about all this

Awesome idea! Anything that encourages new experiences is a good move and this seems like a great way of doing it

I'm pretty guilty of just replaying the same old stuff over and over so this will be a good incentive to broaden my gaming horizons this year, plus I always forget to actually keep a track of what I've played over the course of a year so this helps with that as well!

I am fully on board. Also, Mocky!

I genuinely thought it had only been a few months since I last saw Mocky post, not 5 and a half strawberry floating years!

Great idea for a thread as well. Already filled in the two games I started in January that I've poured hours into so far, PowerWash Simulator and Satisfactory. Probably going to be able to add Chrono Trigger to it at some point as well.

Mocky's had his account hacked by a time traveller

Do they have to be retro games or do new releases count?

I'm off to a strong start, been playing a lot this January.

Should be smashing some oldies soon as I have a few CRPGs lined up like A Bards Tale.

Herdanos
Go for it, Danmon!
Joined in 2008
AKA: lol don't ask
Location: Bas-Lag

It's great to have you back, Mocky

Sounds like a good idea. Not sure I would make it through so many games as I don’t play as much these days but I’ll get some over the year from new games anyway.

Cool idea, and I love a good Excel spreadsheet