Steve had better not get any bright ideas from this.

Remember when they were asking people to donate money through a subscription to "support the site"?

Victor summed it up pretty well back at the start of 2018:

Victor Mildew wrote:As soon as all that gooseberry fool kicked off and there was another site being set up, you just knew the people doing so we're in it for the money.

A guy makes enough money off a site to live on and drive a Porsche? Let's steal his site from under him and have some of that sweet sweet moolah for ourselves!

It's funny to me that this sale is causing a commotion now when all the signs were already there. They were there from the moment the site was set up and from how the business side was established, then got reaffirmed with the crazy expensive no-ads sub when the staff were deliberately unclear about the site's monetisation and profit. That's the corporate internet for you, and it's kind of sad that such a left-leaning community got suckered by it.

Jenuall wrote:Wow, so being the owner of a toxic cesspit really does pay off huh?

You don't really believe all these tall tales that Green Gecko posts, do you?

Jenuall wrote:Wow, so being the owner of a toxic cesspit really does pay off huh?

You don't really believe all these tall tales that Green Gecko posts, do you?

I believe every word that our Great Leader speaks! As should all good and faithful citizens of GRcadia!

You've got to respect the hustle really.

Stole someone's else site under the premise of being the noble savior and sold it 4 years later for $4.55m.

I've heard a rumour that Steve is up to some really dodgy gooseberry fool. So I'm setting up NuGR. 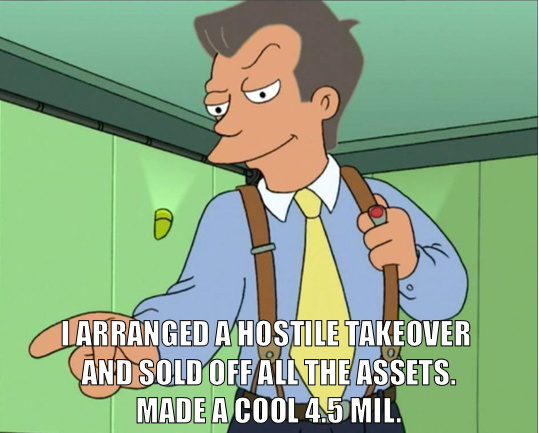 I've just clocked it was making $560k a year

Absolutely scandalous to be making that and using unpaid volunteers.

Is Steve still the owner of GRcade? I'd thought that Gecko was the boss nowdays?

I believe that GG got a Nintendo Switch and maybe a couple of games, too, a few months back. Definitely sus.

Tomous wrote:I've just clocked it was making $560k a year

Absolutely scandalous to be making that and using unpaid volunteers.

A moderator just confirmed in the announcement thread that they knew how much profit it was making. Idiots.

For now I just want to say I am glad you got the deal through Cerium. As with all mods, we don't always see eye to eye but there is no doubt that you have spent years supporting the site behind the scene with the rest of us. I am so glad you can begin your journey of recovery in mental health. As a moderator I can walk away when it gets too much and every mod, community and member has shown support in times that I do take breaks because of the toll it can take. I cannot imagine the strain of having to site's responsibility on your shoulder. I hope you enjoy a long break and find peace and happiness.

I guess the mods enjoy the power trip too much to walk away.

I hope you enjoy a long break and find peace and happiness.

Considering how quickly a message board can collapse/migrate away, that's crazy money.

Anybody want to help set up "NeoResetEra" so we can sell it for millions in a few years?

It's been monetised really well and they managed to do so pretty quietly.