The Interesting Thread 2017 - Mudlarking in the Thames

So I thought it would be interesting to do a short, easy to read/digest study on random subjects of intruigue and update with new stories every couple of days to make them days at work just a little bit more bearable.

Page 1: The Ararat Anomaly- Could this be the remains of Noahs Ark?
Page 2: The Guanajutano Mummies- Creepy, well preserved mummies from around 1833 on display in Mexico.
Page 2: Bone Churches- We explore creepy European churches scattered with corpses, decorated with bone.
Page 3: Creepy Recordings- Including first ever recording, Jupiter sounds and possible human sacrifice in space.
Page 3: Strange Human Deaths- Disturbing, strange stories (and a horrid video) on human death.
Page 3: Strange Satellite Pictures- Desert art and earth anomalies captured in Google Maps.
Page 4: The Secret Giza Caverns- A vast cavern system that runs beneath the great pyramids, could the legendary Hermes be buried here?
Page 5: Faces of Belmez & Bog Bodies- Supernatural faces appearing in concrete and Prehistoric mummified remains.
Page 7: Dead Bart, Mickey Mouse and Area 51.- A lost Simpsons & Mickey Mouse episode and satellite pictures of the infamous air force base.
Page 8: Piri Reis Map- An ancient map that shows the Antarctic was explored and charted before the ice lay claim to it. 6000 years ago.
Page 9: Piri Reis Map: A closer look & Atlantis I examine the small details of the map closer including translations of Piri Reis' annotations and the legend of Atlantis and other sunken cities.
Page 11: The Voynich Manuscript- The most mysterious manuscript ever.
Page 12: The American West, Crazy Cryptozoology Shootouts, treasure and ghosts from the wild west and monsters from over the world.
Page 15: Strange traditions/rituals- From Tibetan sky burials and other funerary shenanigans to the Amazon bullet ant ritual. NSFW!
Page 15: Da Vinci Mysteries: Mirroring- We look at some startling images shown when you put a mirror in the middle of Da Vinci art. Mysterious structures, figures, Baphomets and more.
Page 15: Majora's Mask
Page 17: Antarctica Before the Ice- Speaks for itself really. Featuring Dinosaurs.
Page 18: The Sokushinbutsu Monks- Creepy monks who starved and mummified themselves in the 1800's.
Page 19: Halloween 2010 Special
Page 22: Nintendo - A Sad Story - Mario meets Silent Hill in this creepy animated movie about the state of Nintendo.
Page 22: Treasures of the Ancient World part 1 and 2- The Oak Island Money Pit, Sutton Hoo discovery and some british treasure hordes. Also a selection of antiques available to buy online.
Page 23: Ghost Towns- Abandoned towns and cities throughout the world.
Page 24: Origins of Nursery Rhymes- 6 classic nursery rhymes, and the stories behind their origin.
Page 25: Lost Armies- Two armies that vanished.
Page 25: Atlantis and Doggerland- Has Atlantis been found beneath marshland in Spain and the European Atlantis claimed by the sea 6000 years ago.
Page 25: Unsolved Cryptography- Five cases of strange, unexplained and undeciphered codes.
Page 27: Cryptids and Dinosaurs- Some more Cryptozoology.
Page 28: 6 Interesting Things- A collection of stories and discoveries.
Page 30: The Titanic Mosaic- Detailed photographs of the Titanic on the ocean floor, and other stories.
Page 43: 2017- The Skeletons of Roopkund Lake The Interesting Thread returns with a look at the mysterious floating skeletons of Roopkund Lake in India.
Page 43: 2017- The Black Paintings of Goya
The inspiration behind Goyas disturbing Black Painting series.
Page 43: 2017- Mudlarking in the Thames When the tide goes out, treasure seekers hit the muddy shores of the Thames.

On June 5th 2006, Bible Historian and explorer Bob Cornuke led an expedition of 15 geologists, historians, archeologists, scientists and attorneys on an exhausting mission 13,300 feet above sea level to locate and document the tremendous sections of what is thought to be Noah’s Ark located in the Ararat mountain range six hours North of Tehran, Iran. It had been essentially buried beneath the preservation of glaciers until last year when Iran recorded the hottest year on record which melted some of the snowcap revealing 450 by 75-foot footprint of the “object.”

The Koran stated that "Noahs Ark" was on Mount Ararat. " The site is directly below the mountain of Al Judi, named in the Koran as the Ark's resting place.

the expedition found an altar, which could very well be the altar Noah built because it was made from the same materials they later found in the Ark. They found grapevines over two inches think in the area, of which the DNA from the grapes is the oldest known to man. Genesis 9:20 says that Noah planted a vineyard. But most amazing was the ark itself. It was found in sections, somewhat like a house that had collapsed over the years. Sections of petrified wood 12 to 14 feet high and 40 feet long were found. They found a huge pile of timber, thought to be floors or walls, in four-to-six foot sections. 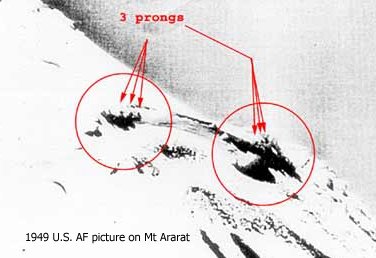 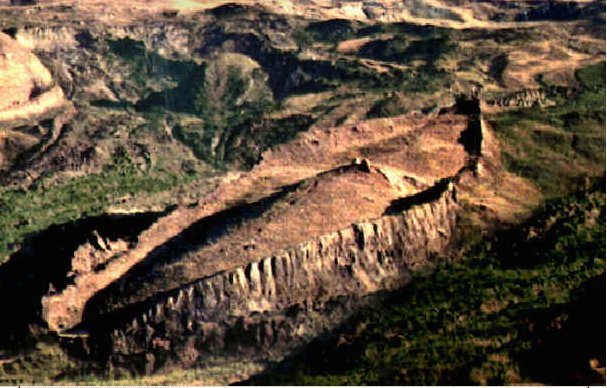 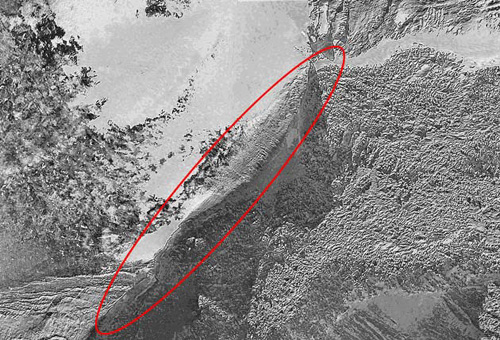 The remote site contains a buried, ship-like object, resting an altitude of 2,300 metres. At 170 metres long and 45 metres wide, it conforms almost exactly to the 300 cubit by 50 cubit boat that God told Noah to build, according to Genesis 6 in the Bible. Same anomaly as the 1949 image above. Satellite image of 'Ararat Anomaly,' taken by DigitalGlobe's QuickBird Satellite in 2003.

This satellite view shows Noah's Ark jutting out from the snow on Mt. Ararat.

This rivet was found at the site.

Prologue: The Quranic verse detailing about the resting place of the Noah's Ark is found in Chapter Hood, verse 44 (Qur.aan 11:44). The verse says:

Pretty fascinating, could it really be the ark?

If someone found Noah's Ark in 2006, wouldn't we have heard about it by now?

This one of the reasons I stay attached to the church: I find the historical/archaeological side to the bible fascinating.

God and the creation story aside, most of the bible is historically accurate. Id say Noahs Ark did exist and he did have 2 of every animal.
Of course, I take the 'flooding of the world' to mean the known world, which for Noah was the Middle East and Jewish Scholars would have thought so when writing these events down. Also his 2 of 'Every Animal' would have been local species, cattle and suchlike. Modern misinterpretation has misconcieved this to include Kangaroos, Elephants and suchlike, Geographically impossible.
Whether he got the plans from God or was just an exceptional engineer of course is down to your faith or lack thereof. Most people disbelieve the story due to the artistic licence used in the childrens version.

I see absolutely no reason why this couldn't be the real ark and that the story isn't largely true. I'd go into more depth, but Carlos has summed up everything I would have said.

Vermin
Member
Joined in 2008
AKA: TimeGhost Shadow wrote:I see absolutely no reason why this couldn't be the real ark and that the story isn't largely true. I'd go into more depth, but Carlos has summed up everything I would have said.

I think a lot of the stories in the Bible are things that have happened, but the stories have been distorted and twisted as they have been passed down between people for generations.

I love all the old school stories, so cool. Especially the Ark of the Covenant. Also interested in how the Nazis were trying to find various biblical arefacts.

killaroo wrote:I love all the old school stories, so cool. Especially the Ark of the Covenant. Also interested in how the Nazis were trying to find various biblical arefacts.

Hitler was a superstitious nut. I'll leave you with something interesting to think about:

The Spear of Longinus/Spear of Destiny, believed to be the spear that pierced the side of Jesus when he was on the cross, currently lies in a german museum.

Ive read the book by Trevor Ravenscroft mentioned in the Wikipedia article and it mentions one of the supposed 'powers' of the Spear is that whoever controls the spear will have domination over his enemies.

Hitler took the spear from Annexed Austria in 1938 and held it until 1944. Whilst the Nazi's had the spear in their possession they were winning the war. When the Americans recaptured the spear in 1944 the Nazi's were repulsed from europe and eventually lost the war.

A coincidence? Probably but you can't help but think....

You mean when the American's got the spear back, which was probably in Hitler's house, Hitler started losing the war?!

I was gonna do Religion and Religious History at A Level and as a degree till I realised I could do literally nothing productive with it.

Even if most biblical scholars haven't dismissed the story of the Ark as not actually literal (well there was probably a big strawberry float off flood at some point), this really isn't Noah's Ark. Bob Cornuke is a massive fraud and no archaeologists or geologists ever accompanied him on that trip to Mount Ararat. It's almost akin to someone selling a piece of the True Cross.

And the Nazis were losing the Second World War long before 1944.

The real Noah's Ark is in Turkey.

I'm going to need more compelling evidence than an interestingly-shaped geological formation, which the human eye picks out because we are pre-disposed to pick out patterns in our environment (see: man in the moon, that face on mars, constellations, facial recognition, ability to read or understand abstract images etc), and a rivet that could have been left there at any time since rivets were invented.

If anything it's a Star Destroyer.

It looks more like a giant vagina to me...

Alvin Flummux wrote:It looks more like a giant vagina to me...

How does that make you feel?

This has been known for years before this expedition, I believe the country's government won't actually allow much work done up there for some reason.

Luno Referral Get £10 worth of Bitcoin for free! - no deposit needed.

Carlos wrote:A coincidence? Probably but you can't help but think....

You seem to be doing a pretty good job of it. Absolute garbage, Carlos.

Yes it's probably a conspiracy. They found the location noted in the kur-an, noticed they had an unusual ship shaped rock formation, got some old wood somewhere and buried it around the place.

Users browsing this forum: No registered users and 128 guests