There's the thing, they gave Danielson a good push and he got the title off Miz but now we're in a situation where he's one of the few punks Miz can beat intheir world. I think it's a poor use of a good talent.

Sad to see Danielson jobbing out to old fishface Miz. Can't see how such a limited talent can be allowed to beat a wrestler like that. Does piss me off to see him put across as somehow better and more experienced.

Vinnie proving an ability to gooseberry fool on real talent as always.

Miz is an absolute talent and Bryan didn't come out of the match looking bad at all. The match was awesome and Miz is the Champion Fishy, you don't 'job' when losing to the World Champion.

Return_of_the_STAR wrote:Anyway the more i watch it, I assume that we now won't see the Rock again until WM unless he makes one more appearance just to further push an angle with Cena & Miz. But going on his promise to never leave, i expect him to stick around after WM, appearing on every RAW (including the London one that i have tickets for), wrestle at every ppv, flirt with Eve and Kelly Kelly, have several funny backstage moments with Santino and ask who in the blue hell Zack Ryder is!!

It is interesting because he made it quite clear he was back for good as far as I understood it. Or at least back in a much bigger capacity than he has been for the last 7 years.

Reading on Wiki his next film starts shooting in the autumn, so maybe he has agreed to appear between movies. Personally if I was him I would find it too hard to resist coming back properly after that sort of a reception. I'd imagine that is far more rewarding than his movie work.

The only problem is, the general product is so terrible he is basically going to fall straight into carrying the entire show if he takes a bigger role. The reception of the fans spoke volumes. It was almost like they were just totally overwhelmed at watching something decent, like Rock was going to lift WWE out of the mire and reward the fans that stuck around.

I have only had a passing interest over the last few years, just to keep a track of who is who and where the belts sit. If Rock is back full time I can see myself sticking with it. A Rock/HHH WM main event would be more appealing to me than anything else on the roster which says a lot about the current stars.

If The Rock told Vince he wanted to come back full time tomorrow he'd be pushed back to number one face in a heartbeat with Cena making room. Jus sayin'.

Zellery wrote:If The Rock told Vince he wanted to come back full time tomorrow he'd be pushed back to number one face in a heartbeat with Cena making room. Jus sayin'.

He won't be back full time however, so we'll never know.

If Cena & Rock do a McMahon/Bischoff & hug I'm turning off the TV.

For those that want the new theme, cleaned up & without crowd noise, here it is:

The new Jericho book arrived in time for the weekend.

All the big guys are bald... Notice how nowadays in WWE no top man is bald... And it sucks.

The best haircut in the WWE has to go to Dolph Ziggler, though. I've said it before and I'll say it again, he's managed to find a haircut so extreme it can only exist in wrestling in 2011. When you consider the wealth of gooseberry fool haircuts that some people have, it's amazing that he's found it.

As a friend said, he's the result of a three-way between troll face, Sid and a Pot Noodle.

The exchange between Jericho and Shawn Michaels over whether Jericho was the new Doink had me laughing for ages.

All the big guys are bald... Notice how nowadays in WWE no top man is bald... And it sucks.

None of them are bald, they've a full head of hair but shave it. Bald wannabes because they've worked out the secret formula for headline mega success.

The Rock can grow hair...

How can you mention big bald wrestlers without: 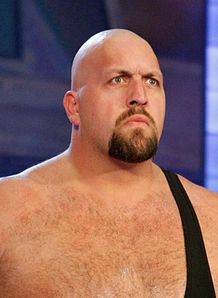 Interesting. If he wasn't going to show up until Mania then why bother making him new music and a video? There has to be some sort of angle for all this other than simply the host. Elimination Chamber is this Sunday. With an epic four matches announced!

Wrestlemania 27 will follow past trend and have 27 points up for grabs. Pell is already 11 ahead so even though there is ample opportunity to catch him up he could make Wrestlemania pretty much redundant if he puts in a good round here.

Users browsing this forum: No registered users and 36 guests